The Need for Landless Permaculture

Part 2 of a series on social & economic inequality in permaculture. Part 1 is entitled: The State of American Permaculture: A Millenial’s Perspective. Part 3 is entitled: Environmental Activism in Disempowered Communities: A Pattern Language for the Privileged.

The first essay in this series, entitled The State of American Permaculture: A Milennial’s Perspective was met with a stark dichotomy of support and criticism. In that essay, I analyzed the difficulties of making a living as a second-generation permaculturist, and spoke to some of the economic inequalities within the permaculture movement. I also offered a business model that seeks to empower low-income individuals to access permaculture education by making such programming nominally free. The support and positive feedback that I received fits into roughly 4 narratives:

The criticism that I received fits roughly into the following 6 narratives:

I addressed the first two criticisms within that first essay, and so apparently those critics didn’t read it thoroughly. The third and fourth critical narratives are so oppositional to my own understanding of permaculture that I hesitate to engage them because there is no middle-ground available for compromise. The fifth point of criticism has much truth in it, but also represents a subtle and under-examined thread of social injustice that has been woven into the fabric of the permaculture narrative. This will be the topic of this second essay. And the sixth piece of criticism is always valuable to me as a source for self-reflection and the cultivation of humility, and so I thank those wise sages who’ve abolished their own self-absorption and developed the clarity to call me out on mine.

The Creation Myth of Permaculture

David Holmgren says in the introduction to his essential book Permaculture Principles & Pathways Beyond Sustainability that the “focus in permaculture on learning from indigenous tribal cultures is based on the evidence that these cultures have existed in relative balance with their environment and survived for longer than any of our more recent experiments in civilization.” Throughout the permaculture movement, in literature, in classrooms, and in conversations, the idea is repeated:  permaculture is an effort to reinvent for the modern world the kinds of life-ways practiced by indigenous peoples.  And the focus on permaculture as a land-management system tends to reflect this story as well, with permaculturists widely valuing and seeking out traditional land-management strategies as the heirlooms of an age when humanity treated the Earth with deeper care. Yet, as I have mentioned above in the list of outside criticisms of my first essay, and as anyone who frequents the permaculture blogosphere or social media, or who has attended a major convergence recently, can attest, a debate rages about whether permaculture can or should be applied to the design of social structures as opposed to land use. The argument against social permaculture ignores huge portions of the founding literature  from Holmgren and Bill Mollison who spoke heavily on the design of community, economy, and culture. And yet, some of the heavy bias toward permaculture as land-management may be attributed to the kinds of examples that the founders overwhelmingly pointed to in the early days, which were largely agricultural.

Gregory Cajete points out in his impeccable book Native Science that “in its most basic sense, culture is the way in which a group of people have come to relate to a place and its natural processes.” Culture provides the array of tools and techniques available to an individual or community for the purpose of land-management. Dave Jacke explains this idea in-depth in his interview on the Permaculture Podcast with Scott Mann, and I have heard this idea reiterated in works by Starhawk, Charles Eisenstein, Derrick Jensen, Joanna Macy, & Gregory Bateson. In essence, a land management system represents a conversation between the voice of culture and the voice of the Earth, and individual practitioners are the transmission of the message. In the same way that oppression of people is manifested when one culture deems another to be of lesser worth, if the voice of culture says that the Earth is unfeeling and that the needs of the Earth are beneath the needs of people, then that culture’s land-management strategies will degrade the land.

There is one aspect of modern life, though, for which we cannot look to any ancient examples for guidance. All indigenous and traditional societies lived much closer to the land than do many members of our modern civilization. So how do we design sustainable systems in places and cultures where there are people who do not have land access, who do not actively interact with or tend the Earth, and whom have forgotten how to do so entirely?

The narrative expressed in the criticism of the first essay in this series, which I summarized as: “Build abundance and experience on your land, on your site, and make a living off of that…” and is so common in permaculture, automatically excludes anyone without land access, or whose land is impacted by outside forces that limit the possibilities for self-reliance. Inherent in the idea of the land-based permaculture system is a bias toward those with land or the financial resources to acquire land, and those who live in areas and cultures where land is abundant and accessible. Land access is not a “black or white” issue wherein a person or community either has land or doesn’t. Land access can have qualitative differences as well. There are many factors that affect the quality of land access including:

And the quality of land access tends to be lower in arid and urbanized areas as is evidenced in the Zone Map below: 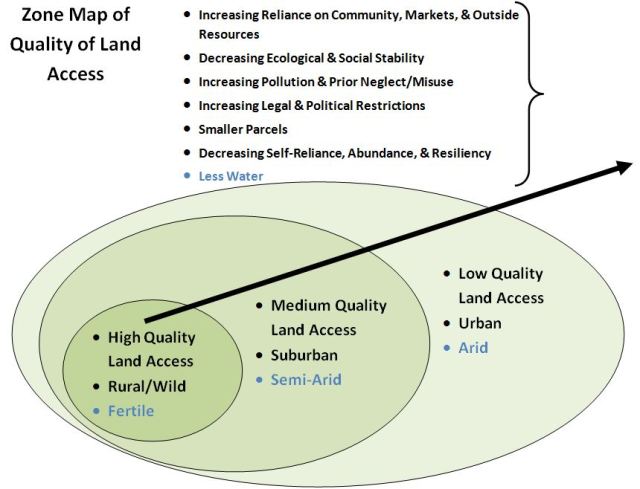 Furthermore, heavily urbanized, ecologically degraded, and arid landscapes tend to be the population centers of the economically disadvantaged, of indigenous peoples, and of peoples who have been historically subjected to racism and genocide. In these places and in these communities the vast majority of people do not have access to the quality of land and to the financial resources needed to be self-reliant on a permaculture site, to make a living on permaculture, or to build material abundance. The narrative that says that permaculture begins on the land and that anyone can access resources if they work hard enough is rooted in the economic and racial privilege of cultures that have historically dominated the desirable land-base and the political establishment.

Nonetheless, the call to the wealthy to re-allocate their surplus resources to the underprivileged as a solution to all of humanity’s problems has been echoed from Jesus to Bill Mollison, yet remains unheeded. That is why permaculturists have so strongly encouraged local efforts to gain local control over local resources as a solution to local scarcity. And so I call on the permaculture community to abandon the narratives rooted in cultures of oppression that restrict novel approaches to sustainability by communities who lack the abundance of high quality land access.

The classic permaculture model sounds like this: permaculture practiced on the land leads to an abundance of material resources which can nourish and cultivate community.

But in a place where land access is unavailable or where the quality of land access is very poor, the design of social structures that lead to sustainable community is the only available entry point into permaculture. Strong communities grounded in rehabilitated cultural systems grounded in shared ethics, shared language, shared values, and mutualism can build an abundance of material resources through the cultivation of local economonies not directly based on the resources of the land. This is why, as I stressed in the first essay, it has become necessary for permaculture education to be nominally free in places where financial resources from land-based systems are scare. In such places, the systems analysis that permaculture provides can empower people to develop green technologies founded upon information, services, and the overlooked or underutilized resources of the waste of our present civilization.

These cultivated resources become money that can begin to make land accessible and to nudge poor quality land access toward higher quality land access by ameliorating factors such as pollution, parcelization, political restrictions, and limited access to the information needed to rehabilitate the land and to relate to it in an empathetic and sustainable manner. In systematically redesigned sustainable cultures, individuals regain health, wisdom is generated and cycled, and the wish to reconnect to the Earth is likely to arise naturally from the inherent human  connection to the Earth, from what Edward O. Wilson, Stephen Buhner, and others have called “biophilia,” an innate love of the natural world.

Therefore, social permaculture implies a second narrative possibility that sounds like this: permaculture practiced in the community leads to an abundance of material resources which can nourish and cultivate the land.

Permaculture in the Community> Material Abundance> Nourishes the Land

And the two narratives can nourish each other:

1 Response to The Need for Landless Permaculture